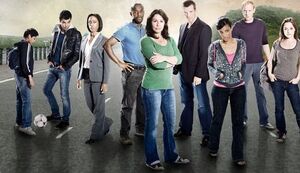 The wiki about Survivors that anyone can edit. We opened on January 19th, 2010 and are currently working on 100 articles

Survivors is a British science fiction television programme produced by the BBC. Set in the present day, the series focuses on a group of bewildered survivors living in the aftermath of a devastating virus – referred to as "European Flu" – which wipes out 99% or more of the world's population. The series sees the characters struggling against terrible dangers in a world with no society, no police and no law and order led by the leader of the group, Abby Grant. According to... See full article...